From the onset of Hitler’s consolidation of power, economic reform was a main goal of the Nazi regime. Its objective, however, was not only to achieve economic prosperity within Germany but also to rebuild the German military and to wage a war of conquest. The rebuilding of the economy through public/private partnerships and expanding industrial production enabled the quick mobilization of the German armed forces and transition of existing industries to supply the German war machine.  In addition to efforts to rebuild the economy prior to the war, a major transition occurred during the war years as forced labor was utilized in order to continue production following German labor shortages. 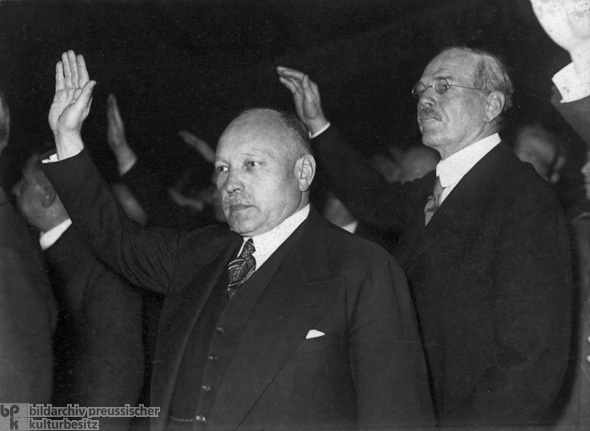 German Industrialists Salute the Flag at a Rally for the German Economy in Berlin (November 7, 1933)

To achieve Nazi ideological goals, including living space for a pure German race, an expansion of the German state was required. A strong military and thriving economy were necessary for the acquisition of Lebensraum, but in 1933, the German military was a small border defensive force, as in compliance with conditions of the Treaty of Versailles. Furthermore, the German economy was in disarray after years of depression.  Ultimately, to expand the German state within a reasonable period, Hitler and the Nazi party identified the need to restart the economy with an emphasis on establishing sectors that could easily transition to military production and state sustainability efforts. An early example of such an action was the Hereditary Farm Law, implemented on September 29th, 1933. This law aimed at supporting German farmers, strengthening the agricultural industry, and ensuring enough members of society were focused on providing adequate food for the German state.  Having sufficient domestic food supplies is crucial to the future war effort.  In addition to securing resources necessary for war efforts, the Nazi regime established strong ties with private industry leaders to ensure they would serve in the general interest of the state. On February 20th, 1933 Hitler delivered a speech to a group of leading German industrialists stressing the importance of continued private industry and private property within Nazi Germany.  This initiative was an attractive rallying point among industry leaders to ensure their hold on wealth and ownership, opposite of communist ideals that still existed in the country at this time.  Hitler’s promise to maintain the existence of private industry led to widespread support among industrial leaders of the Nazi Regime and allowed the regime to implement more aggressive policies that transitioned private industries to focus on important military production. Although property and industry remained in private ownership, the state obtained the ability to direct industry through government incentives aimed at those who served the interest of the nation. 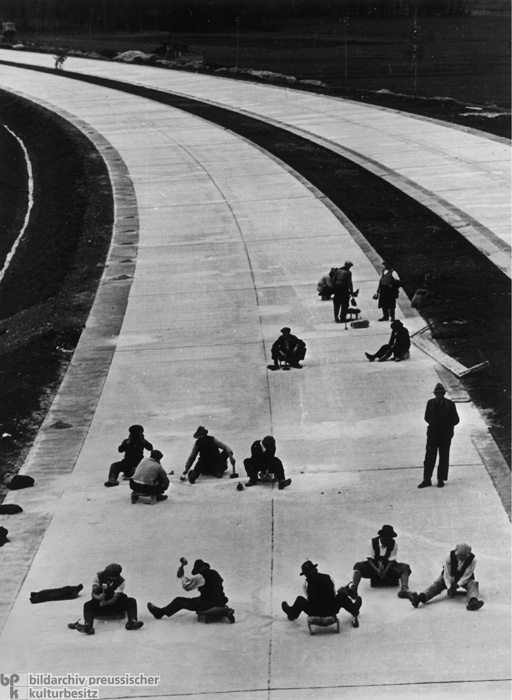 The most notable economic policy change for the preparation of war came with the introduction of the four-year plan in the summer of 1936. The plan's purpose was making Germany both economically and militarily ready for war in a period of four years. Hitler appointed Herman Göring as head of the program, to lead efforts that assisted private industry in achieving economic self-sufficiency in order to prepare for inevitable military conflict. This plan provided state assistance through subsidies and tax credits to companies willing to undertake projects with a military importance that may have otherwise been unprofitable or needed large amounts of capital to undertake. Initiatives under this plan served purposes of employing German citizens, boosting the economy, and lowering the unemployment rate, while also establishing infrastructure and facilities necessary for waging war. By running budget deficits, Hitler was able to continuously provide state financing for public projects, which in return benefited the economy, putting Germans to work and increasing support of the Nazi regime. An example of a project serving dual purpose was the state-funded Autobahn. This project not only put a significant number of German laborer’s to work, but also allowed for the quick mobilization of German military forces through an interconnected system of roads. Another example is the state-subsidized auto industry. Volkswagens, which translates to "people's car" were given large amounts of state funding to develop an affordable car for normal German citizens. This also served the purpose of creating an industry that could easily transition to producing vehicles for war, including troop transports and armed vehicles. Through successful state-funded projects, the Nazi regime not only prepared the nation for war by establishing a stronger economy and the ability to build and mobilize an army but also by rallying public support around the Nazi regime and ideological goals. 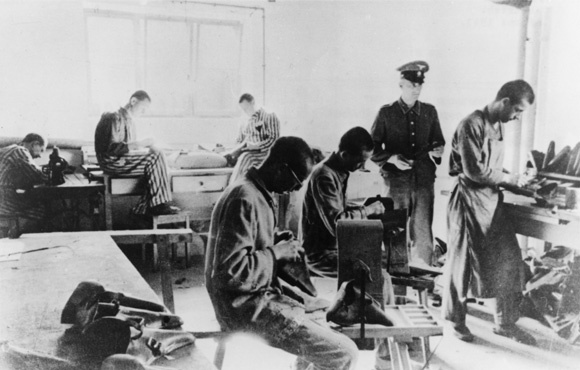 After the onset of the war, much of Germany’s labor force was called into the armed services. To continue the mobilization of the German economy for total war new policies were adopted to adapt to the labor shortages. On April 20, 1942, Fritz Sauckel’s Mobilization Program was announced, recruiting foreign workers into forced labor. This policy allowed for continued production and economic expansion in the country, at the expense of 5 million exploited laborers. These workers were deported from occupied territories and were essentially slaves to the Nazi regime. The use of foreign slave labor served two purposes. The first is noted above, was to fill the void in Germany's employment needs. The second was to delay the mobilization of nontraditional German workers including women. This was an effort to preserve normalcy on the home front, which was a major concern to Hitler.

The Nazi regime was able to adequately prepare for a war of conquest by combining efforts to restart the economy and build up industries that served important military functions. The rebuilding of the economy through state-funded projects and ties with private industry rallied support around the Nazis and future war efforts. This allowed Nazi leadership to pursue ideological goals that required the conquering of foreign lands with the support of the German people.

For Further Reading →
Preparing for War through Economic Policy