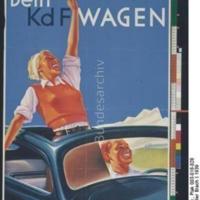 Many know it as the Volkswagen, but Hitler gave it the name “KdF Wagen.” The car was mass produced in 1938 so that almost anyone could afford it. Similarly to KdF vacations, this car was produced for middle-class Germans. The propaganda around the “People’s Car” proposed that it would bring them “joy” and fulfill their transportation needs. It was used as another Nazi tool to promote the perks of National Socialism to the German people. Another benefit that the KdF Wagen brought to middle-class Germans was the establishment of car factories, which resulted in more opportunities for employment. In the book, Strength through Joy: Consumerism and Mass Tourism in the Third Reich, Sarah Baranowski describes how increased employment and mass producing goods for a low cost supported economic growth. Baranowski explains how KdF mediated between its clientele and market-based leisure to keep its costs low, which compensated wage freezes, longer working hours, and the restrictions on private consumption. The KdF Wagen was mass produced, consumed, and stood for a "people's community," all in which National Socialism was intending to promote.