"Through me the Protestant Church could become the established church, as in England."

Protestant Christianity began in the sixteenth century with Martin Luther (museeprotestant.org). With a long history of Protestantism, religious organization had become a strong component of German culture. Richard Steigmann-Gall describes in The Holy Reich: Nazi Conceptions of Christianity, 1919-1945 how the liberal Protestant Association, founded in 1863, initiated support for a national church—a central point of the early German Christian (Deutsche Christen) platform. The idea of a people’s church gained support after the defeat and revolution in 1918. In her book Twisted Cross: The German Christian movement in the Third Reich, Doris L. Bergen describes how this political shift increased ties between German culture and ethnicity. By portraying the Nazi war for living space (lebensraum) against communism and Jewry, the Nazis created the idea of “Aryan” German Christians fighting a holy crusade on the Eastern Front against communists as well as Jews—the killers of Christ. 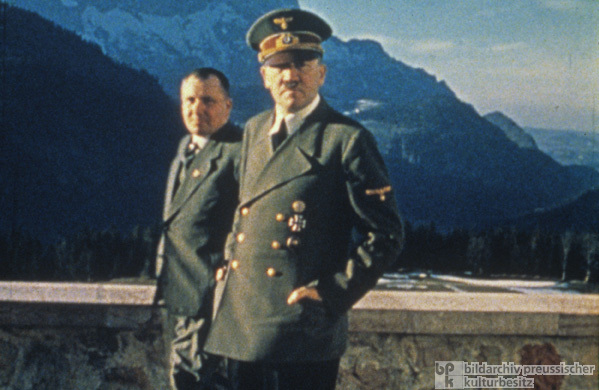 Martin Bormann, one of the most influencial figures in the Nazi regime, maintained a close relationship with Führer Adolf Hitler as demonstrated by their shared belief in the inability to fully synthesize Christianity and Nazi ideology (German History in Documents and Images).

Many Nazis saw Nazism and Christianity as incompatible, while others saw a certain alignment around German nationalism and pursued an alliance of sorts for strategic reasons. Martin Bormann, Deputy Führer Rudolf Hess’ chief assistant, describes in his letter to Alfred Rosenberg the position shared by Heinrich Himmler and Adolf Hitler, “Christianity and National Socialism are phenomena which originated from entirely different sources…communities of Christian faith would never be able to accept the ideology of National Socialism in its entirety.” Written in February 1940, this open declaration regarding the ideological differences between Christianity and Nazism demonstrated the manner in which this religious faith was not only seized by Nazi control, but also rewritten around the Nazi party by way of the German Christians.