With the end of World War II and the Nazis’ defeat at the hands of the Allied powers, Protestant tensions were redirected through their coming to terms with their past actions and affiliations (Vergangenheitsbewältigung). In October 1945, the unified German Protestants’ overcame the tensions that characterized the Reich through the Stuttgart Declaration of Guilt by the Council of the Protestant Churches of Germany. “What we have often testified to in our communities, we now declare in the name of the whole church: it is true that we fought for many long years against the spirit that found its terrible expression in the violent National Socialist regime; however, we also accuse ourselves of not having professed our faith more courageously, of not having prayed more faithfully, of not having believed more joyfully, and of not having loved more fervently” (Stuttgart Declaration). The Stuttgart Declaration emphasizes the limits of resistance as well as the Protestant churches’ guilt in association to Nazi crimes. This fundamental renewal of the Protestant Church demonstrated the manner in which the Nazification of Protestantism did not last. Their ability to unite and move past the synthesis of Nazism and German Christianity displayed precisely the new beginning this statement declared regarding the future of German Protestantism. 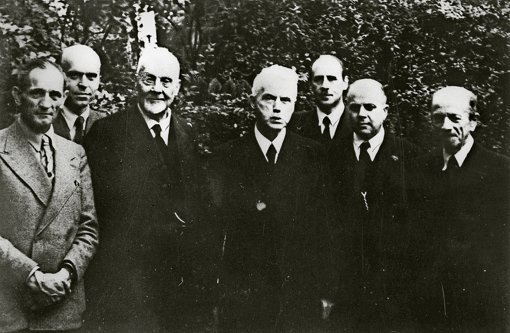 (above) Martin Niemöller, Wilhelm Daim, Theophil Wurm, Hans Meiser, Heinrich Held, Hanns Lilje, Otto Dibelius. In 1945, these Protestant representatives joined together and formed the Council of the Protestant Church in Germany in order to sign the Stuttgart Declaration (Stuttgarter-Zeitung).