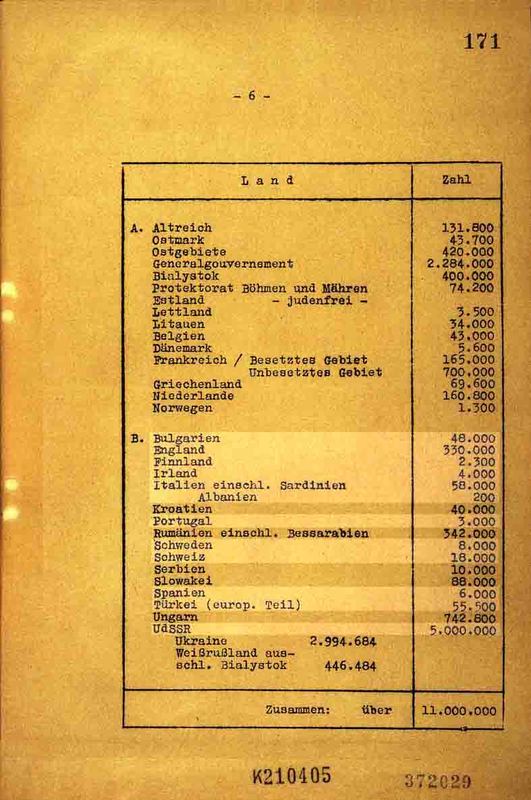 Wannsee Minutes regarding number of Jews, Roma and Sinti, and 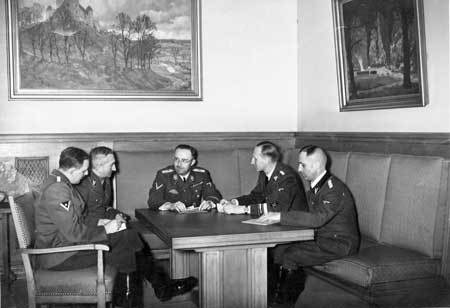 The Wannsee Conference played a significant role as a key turning point during the Holocaust which lead to the rapid extermination of the Jews. The framework discussed at this meeting lead by Reinhard Heydrich laid out in detail, a plan for the extermination of European Jews. Up until the holding of the Wannsee Conference, roughly 550,000 Jews had already been forced to emigrate under the command of the Central Office for Jewish Emigration. Among those who attended the conference were SS-Gruppenführer Otto Hofmann , SS-Gruppenführer Heinrich Müller, and SS-Obersturmbannführer Adolf Eichmann who were all main architects in the planning of the deportation and extermination of the Jews. Reinhard Heydrich as Chief of the RSHA was given the authority over constructing the “Final Solution.” The high-ranking officials of the Nazi Party wanted to develop a way to increase the emigration of the Jewish people to ensure of the extermination of roughly 11 million Jews throughout Europe. The beginning stages of the “Final Solution” started in 1941 during the mass murder of Jews following Operation Barbarossa using the already established Einsatgruppen.

The significance of the Wannsee Conference towards the extermination of European Jewry was using the developed methods of the NSDAP in regards to anti-Jewish Policy to further advance the systematic murder of the Jews. In initially setting up plans to increase the ‘evacuation’ of Jews to the East, Heydrich and the other officials knew that the lack of German resistance among the people would help to increase the efficiency of their deportation. When the Nuremberg Laws were established in 1935, the NSDAP created a clear divide among the German population. It was intended to gradually build up towards the aiding the extermination of European Jewry through the Holocaust. By the creation of laws such as the Protection of German Blood and Honor, it prevents any close relationships from forming between German and non-German peoples. This further creates a divide among the population through causing German citizens to now view Jews in society as outcasts and inferior. This leads to the boycott of everything related to Jews in society. Through these boycotts it creates an illusion that the Jews are counterproductive to society based on their businesses failing, which further increases the movement of the desire to remove Jews from society. This was used by the officials at the Wannsee conference to create the framework of mass deportation of Jews towards the east. The knew that there would be support behind their forced deportation of the Jews by German citizens. The NSDAP aimed to use the conference to accelerate the extermination of the Jews based off of the response from years of the Nuremburg Laws being in effect.  Through the Wannsee Conference the methods in which the Jews would be exterminated was established which lead to the building of extermination camps within German Occupied Poland.

The occupation of Poland by Nazi Germany was used during the formulation of the Final Solution to the Jewish question at the Wannssee conference. The six extermination camps, Auschwitz-Birkenau, Belzec, Chelmno, Majdanek, Sobibor, and Treblinka were constructed in Poland which was the site of the largest population of European Jews. The minutes of the conference establish the expulsion of Jews from every aspect of German life. It was planned to make the arrangements to prepare for the mass emigration of the Jews to ghettos and concentration camps via train transport. The Wannsee conference established the methods of deporting Jews to these camps from all over Europe including Germany to be gassed.

I mean the evacuation of the Jews, the extermination of the Jewish race. It's one of those things it is easy to talk about, "the Jewish race is being exterminated", says one party member, "that's quite clear, it's in our program, elimination of the Jews, and we're doing it, exterminating them". And then they come, 80 million worthy Germans, and each one has his decent Jew. Of course the others are vermin, but this one is an A-1 Jew. Not one of those who talk this way has watched it, not one of them has gone through it. Most of you know what it means when 100 corpses are lying side by side, or 500, or 1,000. To have stuck it out and at the same time - apart from exceptions caused by human weakness - to have remained decent fellows, that is what has made us hard. This is a page of glory in our history which has never been written and is never to be written.

I ask of you that what I say in this circle you really only hear and never speak of. We come to the question: how is it with the women and the children? I have resolved even here on a completely clear solution. That is to say I do not consider myself justified in eradicating the men - so to speak killing or ordering them killed - and allowing the avengers in the shape of the children to grow up for our sons and grandsons. The difficult decision has to be taken, to cause this Volk to disappear from the earth.

← Establishment of the Einsatzgruppen
For Further Reading →
The Wannsee Conference