Hitler's leadership in the Battle of Stalingrad 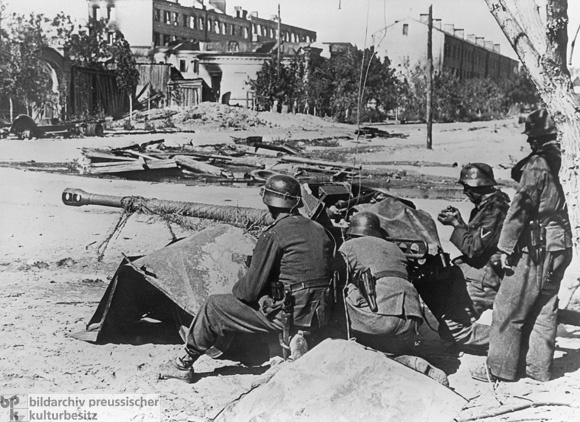 German soldiers operating an anti-tank gun during the Battle of Stalingrad in October, 1942. The German army made offensive victories in the early stages of the Battle, however the Hitler's leadership decisions and the harsh winter eventually led to a Nazi defeat.

Hitler’s authoritarian style of leadership translates in his military approach to the Battle of Stalingrad in 1943. When the German army was under immense pressure from the Russian forces Hitler sent a message to the troops personally promising more supplies are to be delivered; in his diary, German soldier, Wilhelm Hoffman describes the dire situation and the promise made by Hitler, “November 29: It was announced this morning that the Fuhrer has said, ‘The army can trust me to do everything necessary to ensure supplies and rapidly break the encirclement.’” (Donald A. Gregory and William R. Gehlen, Two Soldiers, Two Lost Fronts: German War Diaries of Stalingrad and North Africa Campaigns (Philadelphia: Casemate, 2009), 49.) Less than a week later Hoffman makes another entry into his diary, “December 3: “We are on hunger rations and waiting for the rescue that the Führer promised.” (Gregory and Gehlen, 50) The authoritarian leadership style Hitler follows makes him determined to personally control all aspects of the battle, even when a plutocratic style of leadership, providing more power to subordinates, would have been more efficient and effective.

During the Battle of Stalingrad Hitler is given counsel from his military cabinet, a cabinet that often disagrees with Hitler’s military decisions, however in almost all cases Hitler acts against the advice of the cabinet. In the Battle of Stalingrad Kurt Zeitzler, the Chief of the Army General Staff makes the case to Hitler that the troops lack the resources and energy to come away from the battle victorious, however Hitler rejects the information Zeitzler presents and makes a decision without the support of his military cabinet; “Hitler offered counter arguments, but Zeitzler held to his view. Finally, after the discussion had gone on for more than half an hour Hitler’s patience snapped.” (Albert Speer, Inside the Third Reich (New York City: Simon and Schuster, 1997) 436.) The description of Hitler making an impulsive decision differing from the consultation of his competent military cabinet illustrates the authoritarian leadership, and strong dictatorial, style of Adolf Hitler. 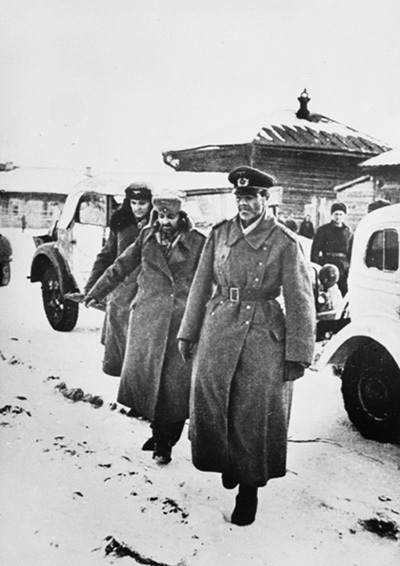 General Friedrich Paulus surrendering to the Soviet army at the Battle of Stalingrad, January 31, 1943. Although Paulus asked Hitler for permission to retreat Hitler was adament that the Sixth Army fight until defeat.

When the counsel from the military cabinet proves to be accurate and the Sixth Army has no option other than to surrender Hitler refuses the request from the Commanding General Friedrich Paulus and declares that surrender is not an option, “Surrender is forbidden. Sixth Army will hold their positions to the last man and the last round and by their heroic endurance will make an unforgettable contribution toward the establishment of a defensive front and the salvation of the Western World.” (Adolf Hitler, radio message to Friedrich Paulus, 24 Jan 1943) In the final entry of the diary from Hoffman he describes the hellish conditions at the end of the Battle of Stalingrad, “The horses have already been eaten. I would eat a cat; they say its meat is tasty. The soldiers look like corpses or lunatics. They no longer take cover from Russian shells; they haven't the strength to walk, run away and hide.”