Ideology and the 'Second Revolution' 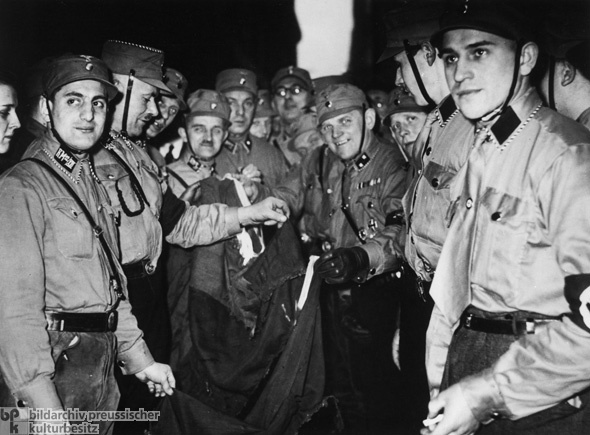 SA members burning the flag of the Weimar Republic on the eve of the Nazi seizure of power, January 1933 (GHDI)

"A tremendous victory has been won. But not an absolute victory! The SA and the SS will not tolerate the German revolution going to sleep and being betrayed at the half-way stage by non-combatants. Not for the sake of the SA and SS but for Germany's sake. For the SA is the last armed force of the nation, the last defence against communism. If the German revolution is wrecked by the reactionary opposition, incompetence, or laziness, the German people will fall into despair and will be an easy prey for the bloodstained frenzy coming from the depths of Asia. If these bourgeois simpletons think that the national revolution has already lasted too long, for once we agree with them. It is in fact high time the national revolution stopped and became the National Socialist one. Whether they like it or not, we will continue our struggle - if they understand at last what it is about - with them; if they are unwilling - without them; and if necessary - against them.” - Ernst Röhm, June 1933 (As quoted in Hitler’s Stormtroopers, 230).

The fateful words of Ernst Röhm qouted above perfectly capture the ethos of the the 'second revolution'. The ‘second revolution’ was an idea promoted by the more radical wing of the Nazi Party, an idea to which much of the SA and its leadership believed in as well. They believed that after Hitler took power, a second revolution was needed to destroy not only the communists and Jews, but the establishment of society, including large industry and agriculture, the churches, and most troublesome, the military. Historians Roderick Stackelberg and Sally Winkler explain how “radicals in the SA, conditioned by the years of struggle for power to oppose the establishment had long been critical of Hitler’s policy of cooperation with the elites,” (Nazi Germany Sourcebook, 169). Fear of a ‘second Revolution’ was widespread among members of Hitler’s more conservative allies like Franz von Papen, and this attributed to the perception of the SA as particularly radical and revolutionary. 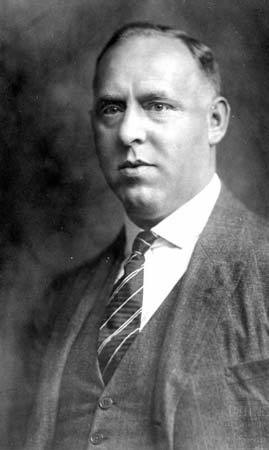 Gregor Strasser, leader of the 'left-wing' of the Nazi Party. (Encyclopædia Britannica)

The 'Left-Wing' of National Socialism

Before Hitler was able to gain complete supremacy over the German government, there were two wings in the Nazi Party. The so-called ‘left-wing’ of the party drew heavily on working-class and socialist rhetoric and were vehemently anti-capitalist and anti-establishment. Led by Nazi ​Gauleiter​ of Munich Gregor Strasser, this faction put more emphasis on the ​socialism​ of national socialism. In the following qoute, Gregor Strasser explains how socialism and anti-capitalism were essential to the National Socialist movement: "The rise of National Socialism is the protest of a people against a State that denies the right to work. If the machinery for distribution in the present economic system of the world is incapable of properly distributing the productive wealth of nations, then that system is false and must be altered. The important part of the present development is the anti-capitalist sentiment that is permeating our people." (Spartacus Educaiton). Ernst Röhm was one of the most prominent Nazi leaders in this faction. Many SA members like SA ​Truppenfüher​ Heinrich Beisner quoted below, joined the Nazi Party to bring about a complete socialist revolution.

“We had certainly committed ourselves for a socialist Germany… We had recognized the cowardice of the bourgeois system… [The Nazis were] carrying out a political struggle in a way that the cowardly bourgeoisie was never capable of.” (As quoted in "Autobiographies of Violence", 229).

In fact, many SA members were committed anti-capitalists and socialists. One SA member quoted below, Johann Ackermann, was even a member of the Social Democratic Party, and later joined the Nazi Party becuase he believed it best represented the interests of the working class.

“I joined the Social Democratic Party, because I believed that is best represented the interests of the workers... after bitter disappointment... I resigned. I lost hope for a better future and better Germany, and afterward couldn't make up my mind to join another party. I then joined the SA in order to serve my Führer.”
(As qouted in "Autobiographies of Violence", 226).

Thus becuase of the strong connection between the SA and the socialist faction of the Nazi Party, both the SA and the ‘left-wing’ of the Party were targeted in the Night of the Long Knives, with Gregor Strasser losing his life in the same night as other prominent SA leaders.

← Street Warfare and Political Violence
Ernst Röhm, Leader of the SA →
Ideology and the 'Second Revolution'