Public Perception and the Night of the Long Knives

The Bad Reputation of the Sturmabteilung

Among the more established industrial and military allies of the Nazis and party members themselves, the SA had a reputation for pugnacity and boorishness. Based on their public and violent street brawls and riotous actions against Jews, the SA were increasingly seen as uncontrollable and barbaric. A diverse group emerged in criticism of the SA, from conservative Chancellor Franz von Papen, to fanatic Nazi leader Joseph Goebbels, and even to President Hindenburg himself. In a meeting with Hitler, Reich President Hindenburg firmly stated that "I shall intervene sharply against any acts of terrorism or violence such as have been committed by members of the SA sections," (GDHI).

In the quote below, Vice-Chancellor Franz von Papen criticizes the SA, particularly their calls for a 'second revolution'.

“I have so pointedly described the problems of the German Revolution and my attitude toward it, because talk of a second wave that will complete the revolution seems not to want to end. Whoever toys with such ideas should not conceal the fact that the one who threatens with the guillotine is the one who is most likely to come under the executioner's axe. Nor is it apparent to what this second wave is to lead. Have we gone through an anti-Marxist revolution in order to carry out a Marxist program?” Vice-Chancellor Franz von Papen, 1934 (Quoted in The ​Nazi Germany Sourcebook​)

In the passage below from the affadavit of Rudolf Diels, a Gestapo leader, he describes how the public and violent actions of the SA made them a major problem for the Secret State Police.

“Because of the interference of the SA and because of the whole revolutionary devopments, all police forces, including the Gestapo… had to fight more strongly against SA excesses than against the communists themselves,” Rudolf Diels, Head of the Prussian Gestapo (Quoted in The Nazi Germany Sourcebook)

Rumors of homosexuality within the ranks of the SA were also common, further degrading their esteem. Coupled with the additional reputation of promoting a ‘second Revolution’ the SA became a liability and a threat to the order Hitler had established. For all these reasons, the insufferable reputation the SA gained drove Hitler to purge the organization in the Night of the Long Knives. 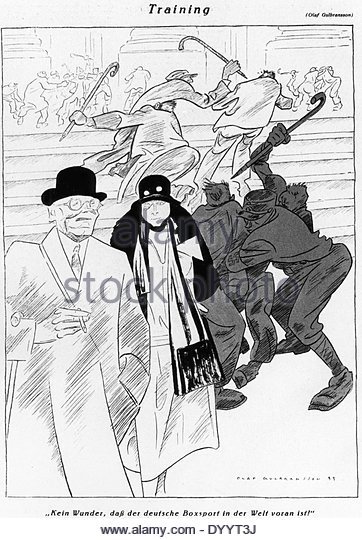 “No wonder that German boxing is so ahead in the world,” A cartoon from ​Simplicissimus,​ a German satirical magazine, criticizing the brutality of the SA and the prevalence of political violence in Weimar society. (​Alamy​)

The Night of the Long Knives

With the threat posed by the ‘second Revolution’, the reputation of violence and homosexuality among the SA, and the personal ambitions of Ernst Röhm, it became apparent to Hitler and his allies that the SA needed to be culled. Angered that he did not receive a ministerial position in Hitler’s cabinet, Ernst Röhm began to criticize him and his policies as not going far enough to achieve a true socialist revolution. In the quote below, SA chief Röhm accuses Hitler of selling out the National Socialism movement in favore of the established elites.

“[Hitler] only associates with the reactionaries now. His old friends aren't good enough for him. Getting matey with the East Prussian generals. They're his cronies now... Are we revolutionaries or aren't we? The generals are a lot of old fogies. They will never have a new idea... I don't know where he's going to get his revolutionary spirit from. They're the same old clods, and they'll certainly lose the next war." Ernst Röhm criticizing Hitler’s alliances with the German establishment on the eve of the Purge (Quoted in The Third Reich: A New History) 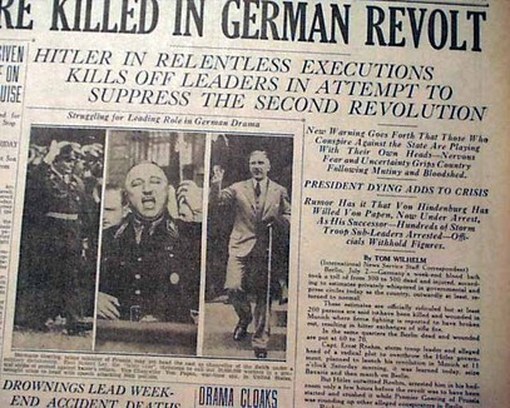 This gave Hitler the opportunity to strike. On the 30th of June, the SS arrested hundreds of SA leaders and executed dozens of them, Röhm included. The Night of the Long Knives did not just target the SA however, but also their ‘left-wing’ Nazi allies like Gregor Strasser, who was also executed. The purge was quickly spun as a defensive measure against a Röhm-led coup, and solidified Hitler’s absolute authority in Nazi Germany. In the qote below, Nazi leader Joseph Goebbels explains how Röhm's ambitions and homosexuality were the main reasons for his execution during the Night of the Long Knives.

“What Röhm wanted was, of course, right in itself but in practice it could not be carried through by a homosexual and an anarchist. Had Röhm been an upright solid personality, in all probability some hundred generals rather than some hundred SA leaders would have been shot on June 30.” From the Diary of Joseph Goebbels, 1945. (Quoted in Homintern by Gregory Woods)

To learn more about the Night of the Long Knives, follow this link to the first-hand account of Erich Kempka, Hitler's chauffeur, who personally witnessed the arrest of SA leaders, including Röhm, during the 1934 Purge.

← Ernst Röhm, Leader of the SA
Bibliography →
Public Perception and the Night of the Long Knives