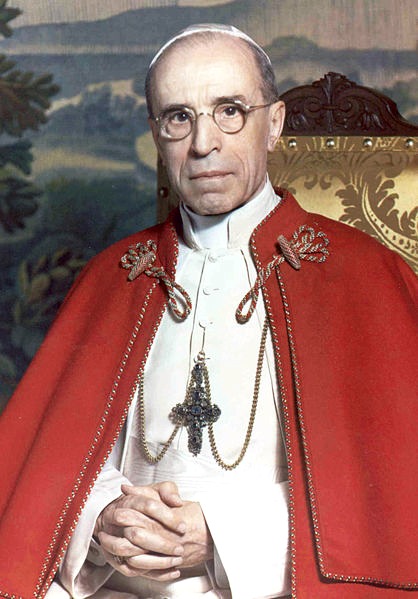 Pius XII who ascended to the papacy in 1939, was one of the more controversial popes in history. While remaining silent on the Jewish issue, he did speak out against the humanitarian issues raised by the Nazis. He addressed these issues in the Summi Pontificatus. The Summi Pontificatus spoke against racial issues and the negative aspects of totalitarian governments. The church noticed the dangers between a church and state that were one. The Nazis number one goal was to have a complete Nazification of society from politics, to social issues to religion. The Vatican operates in a position of great power, which posed a threat for Nazi goals, and with great power comes great responsibility. The world needed a strong leader to take charge in a time of chaos, Pius XII was not the man the world needed. Possibly no world power possessed as much knowledge about the Holocaust as the Vatican, they were in constant contact with Bishops in and around Europe who kept them up to date with growing Nazi aggressions. Their silence can be explained away with a series of excuses but it cannot be justified. While individual Catholics were seized for speaking out against the Nazis, those in positions of power such as, Clemens August Graf von Galen, who used their pulpits as an opportunity to speak against certain Nazi programs, like the euthanasia program, were left largely untouched. One common excuse for the silence on behalf of the Vatican was their fear of reprisal by the Nazi leaders, but if we take individual examples it is easy to conclude that the Nazis would not move against the church as a whole. The Nazis were conscious of public opinion and needed the catholic constituents to keep their plans running smoothly. The Catholics presented the opportunity to be a giant road block and instead stepped aside and allowed the Nazi program to go full steam ahead.