Sexuality was another vital component of the Nazi masculine identity. Both men and women were expected to produce as many children as possible to build the German population. According to Reichsführer-SS Heinrich Himmler, increasing the population was necessary for the ‘Aryan’ race to survive and dominate other races. These children were essential to fuel the armed forces in the wars to come, which tied male sexuality to militancy. Because such a high value was placed on reproduction, sexuality became an important part of Nazi public life. As Dagmar Herzog points out in her introduction to Sexuality and German Fascism, there were discrepancies among Nazi ideologues over sexual freedoms such as premarital and extramarital sex. However, it was generally agreed upon that engaging in heterosexual intercourse was a man’s duty to the public. 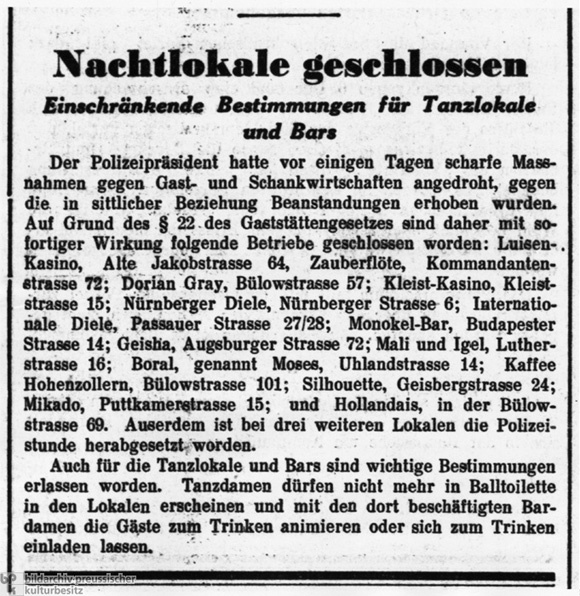 An Article in the Berliner Tageblatt discussing LGBT establishments that were shutdown by the police.

While heterosexuality was a valued part of Nazi masculinity, homosexuality was condemned by the Nazis. Male homosexuality was banned in Germany since 1871 under Paragraph 175, but during the Weimar Republic the LGBT community enjoyed relative freedom. Weimar era society was decidedly lax in enforcing the homosexual ban. This changed drastically when the Nazis came to power. Heinrich Himmler, the head of the SS, believed homosexuals were a stain on German society, and were a threat to the wellbeing of the German people. According to Nazi ideology, homosexual men did not contribute to German society because they did not reproduce. Himmler cited this as a primary reason for their condemnation. Additionally, as Geoffrey Giles points out in The Institutionalization of Homosexual Panic in the Third Reich homosexuality was seen as a threat to appropriate soldierly comradery, and there was a fine line between appropriate homosocial male bonding and homoerotic activity. Because homosexuals were thought to be pederasts, they were considered especially threatening to youth who were the next generation of soldiers, and on whom the future of the Third Reich depended. For these reasons, homosexual men were viewed as the antithesis of Nazi masculinity.

The Nazis’ homophobic masculine ideal led to the tragic persecution of homosexual men. LGBT establishments that had thrived during the Weimar Republic were shut down, and countless men, not all of whom were actually gay, were denounced by community members. During the Nazi period, tens of thousands of gay men spent time in prisons. About 15,000 were sent to concentration camps where many died. They were forced to wear a pink triangle sown to their clothing in order to stand out and subsequently endured unspeakable horrors.