“Infantry: The Queen of the Services.” This poster pictures an infantryman wearing a medal, promoting the idea of military glory.

Poster depicting members of the RAD as soldierly. 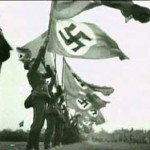 A still from Triumph of the Will which pictures a row of soldiers holding Nazi flags. 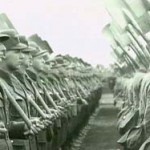 A still from Triumph of the Will featuring rows of marching RAD units, resembling military units. The manner in which they carry their shovels mirrors how soldiers carry their rifles.

The Primary role for men in the Third Reich was to serve as soldiers, and the Nazis introduced conscription in 1935. In addition to conscription, the Nazis went to great lengths to equate manhood with military service. Civilian roles for men, like serving in the Reichsarbeitsdeinst (RAD), or labor service, emulated the military. Members of the RAD wore military style uniforms, and were organized in a militant fashion. Modeling the RAD after the military served to prepare German men for military duty in the inevitable war for dominance and Lebansraum.

Propaganda and media, such as recruitment posters and films, played critical roles in bolstering military masculinity and militant values such as patriotism and comradery. The documentary Triumph of the Will, made by Nazi documentarian Leni Riefenstahl, covers the 1934 Nuremburg Rally and contains an abundance of footage which demonstrates the masculine image the Nazis sought to cultivate. For example, it pictures long processions of marching soldiers, baring endless waves of swastika flags, rows of enthusiastic citizens saluting Hitler and his commanders, RAD units in military formations and Hitlerjugend (Hitler Youth) encampments modeled after the military. These images exude military might, soldierly comradery and the sense of being part of a great cause. Aside from films, there were numerous propaganda posters aimed at recruiting young men into various branches of the military.

Nazi military songs like Lied der Panzertruppen, clearly demonstrate the effectiveness of Nazi propaganda on the average German male. This song describes comradeship, eagerness to fight, willingness to sacrifice for the Third Reich, and enthusiasm for conquering so-called inferior peoples while obtaining territory for Lebensraum.