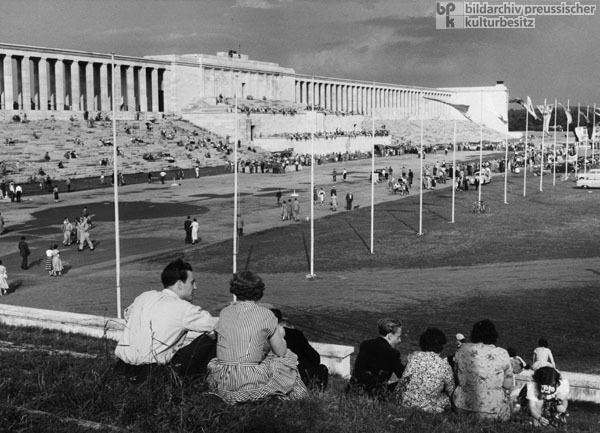 This 1955 photo shows an example of the repurposing of public spaces that were associated previously with the Nazi state. It calls to mind the idea of public consciousness of the past--who in the photo had been present at a party rally, or aware that one had happened there?

But as Hilary Earl makes clear in A Nazi Past: Recasting German Identity in Postwar Europe, denazification and the larger war crimes trials in the 1940s and in the 1960s, which pinpointed specific Nazis, were not a success. Why? The postwar climate mattered more than the war climate. The West was eager to focus on the Cold War ,and West Germany itself initially was very willing to go along with it. Konrad Adenauer, West Germany’s first chancellor (1949-1963), presided over the new country from its most vulnerable to its economic success and social, cultural, and political reintegration into Europe.

Adenauer's policies and beliefs reflected a desire to repress the country’s Nazi past and move forward. As he articulated in his inaugural speech to the Bundestag on 20 September 1949, West Germany ought to to move on from the initial period of denazification and to create rapprochement with the West at the expense of minimizing the past. The attitude of the time was to minimize the German people’s fault in the regime, highlighting individual cases of resistance and considering the vast majority of Germans who had been involved as mere “victims” of the oppressive Nazis.

Jeffrey Herf, in his book Divided Memory: The Nazi Past in Two Germanys, highlights the appointment of Hans Globke (1898-1973) as Adenauer's chief of staff as representational of Adenauer's policy of "democratization through reintegration." The chancellor's choice of Globke, a former Nazi who had assisted in the creation of the Nuremberg Race Laws in 1935, was a confounding and controversial choice around the world. Critics alleged that this was simply "renazification" while supporters claimed Globke's inside knowledge of the Nazi regime made him an invaluable statesman. In 1951, an Allied commision found that sixty-two of one hundred members of Adenauer's new foreign diplomacy corps were complicit in Nazi crimes and forty-three were formerly part of the SS. The implications of continued widespread integration of former Nazis, many of whom had only questionable interest in democracy but were "good" at their jobs, was a growing dissatisfaction among the young generation of Germans who had to find for themselves the hidden history of their parent's Germany.

← The Immediate Post-War Climate
The Next Generation →
Denazification