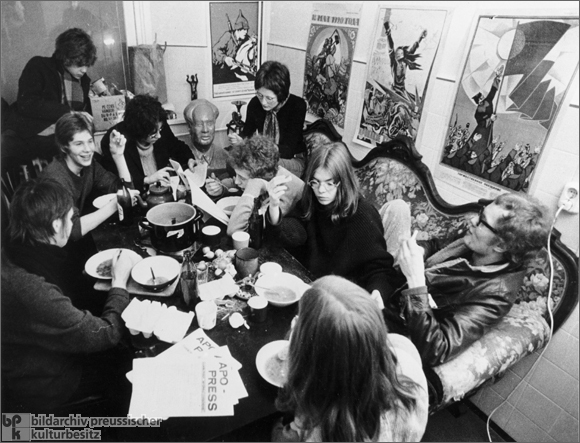 This photo shows the extent of the counterculture by 1968, implicitly displaying the rejection of the Federal Republic’s systems and values. It would be this generation that would question their parents about their role in Nazi Germany--and be generally unsatisfied with the answers they were (or were not) given. 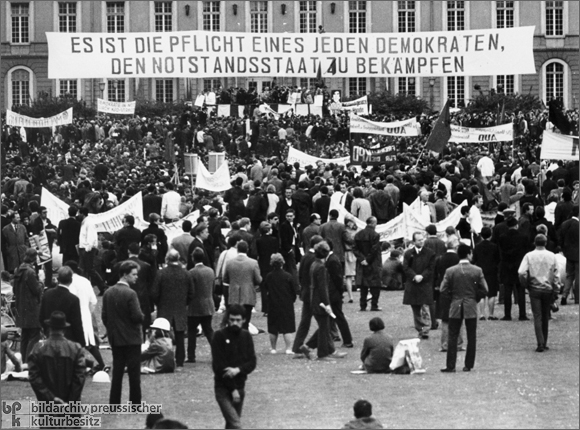 This 1968 photo shows protest by a broad segment of society against a law passed by the Bundestag, or parliament, against emergency powers for the state in times defined as crises.

The problems of this approach of collective amnesia and the shifting of blame to a small cadre of Nazi Party elites were evident, at least to the generation that came of age in the turbulent countercultural decade of the 1960’s. This generation, known collectively as the 68ers despite such resistance occurring throughout the 1960s, wanted a new approach. The 1962 statement of the Socialist German Student Association called for the creation of a “New Leftist” movement to counter the capitalist nature of West Germany. It underlines the rising left-wing disaffection with the direction of West Germany and foreshadows the larger shift in generational perspective on the crimes of the Nazi state--namely the pursuit of a more extended and direct confrontation with the past's difficulties.

Social Democrats and the New Left argued that "more democracy required more memory and more justice," according to Jeffrey Herf. The leftist movement drove the German people to seek a greater understanding of the Nazi era, an impulse which was sorely lacking in the 1950's. By the 1960's, the student movement and the countercultural movement made its way into the mainstream via a second round of Nazi war criminal trials--made possible by an extension of the statutes of limitation on crimes of murder in 1965--and protests against what was seen as antidemocratic government actions.

"We all belong to all of Germany's history."

← Denazification
The Next Generation