Providing Moral Justification for the Nazis 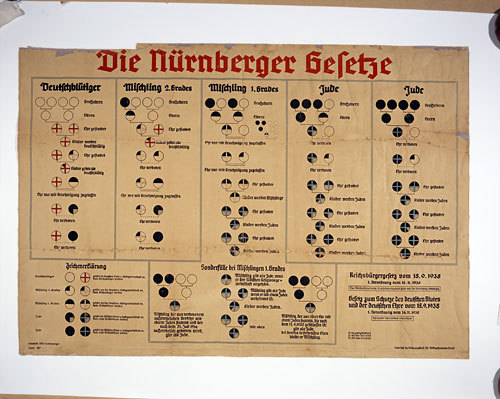 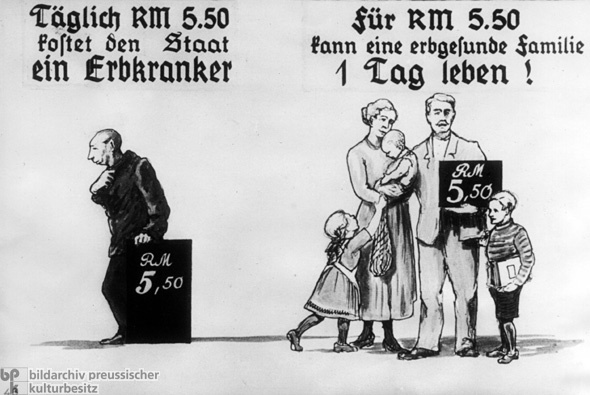 Many people believe that Hitler and the Nazis brainwashed Germans to force them to support the regime or that fear propelled people to allow the mass murder of millions of Jews. Such arguments, however, absolve German civilians of responsibility for the Holocaust. Research has shown that the Nazis successfully obtained enthusiastic or at the least passive support from the civilian population. The Nazis utilized lawyers and doctors to provide the regime with a moral justification for creating a racially pure nation and gaining popular support for their extreme actions. Germans united under the identity of a strong and vibrant German nation, closely resembling the idealized past under Bismarck, and consisting of racially pure Aryans. This realization of this identity heavily relied on the extermination of all groups that threatened it, including Jews and racially inferior Germans, as well as creating a moral imperative for mass murder.

The Nazis first needed to redefine society’s moral imperative in order to gain wide support for their actions against the Jews and other outsiders. This was done by first reshaping the German conscience. In The Nazi Conscience Claudia Koonz defines the conscience can be defined as “an ethically attuned part of the human character that heeds the Hippocratic command: “First, do no harm.” ...(this) universal obligation, far from being universal, is bound by community” (4-5). The German term Volk refers to an "ethnic community." For the Nazis, the ethnic community -- or Volk -- consisted of racially pure, "Aryan" Germans capable of bettering the nation through exemplifying strong German values, such as being able to live and work together under the Nazi state. Through identifying and defining the Volk, the Nazis effectively created an ‘us versus them’ mentality, known as the Volksgemeinschaft. The Volk included all Germans of value, excluding German social outsides, Jews, and many more. Thus, there was distance created between the Volk and the outsiders.

The Nazis utilized laws to reaffirm the outsider status of non- “Aryans”, as well as Germans without value, to further allow for violent measures to be used to rid the nation of them. Under Hobbs assertion of the state, the social contract dictates that the government is responsible for creating law and order to benefit society. This proclaims that it is within human nature to place trust within the state as well as the laws used to govern. Coupled with the Nazi conscience and trust within the state, Germans believed that the Nazi laws were morally correct, and that in fact they were creating a stronger nation. From previous experience, the Nazis knew that citizens responded better to violent justified by the law than random acts of aggression. Therefore, they operated within the law to carry out their violent actions against the Jews without citizens questioning or defying their actions, and instead passively supporting them.

Laws were also used to reinforce the idea of the Volk and provide justification for protecting it from ‘outsiders’. A detailed chart (Figure 1) was published along with the written Nuremberg Laws. This chart showed in detailed who was legally considered a Jew, and thus legally expelling them from the Volk. The Nazis racial ideality was somewhat unique, because they did not abide by the ‘one drop’ policy. Instead they included different ‘degrees’ of Jewishness. The middle of the chart analyzes the ‘Mischlinge’ category, or those with Aryan and Jewish blood. Those in grade two were deemed Aryan and those in grade one were defined as Jewish, base on one’s ancestor’s active participation and affiliation with the Jewish community. The Nuremberg Laws were created to define the Volk. Article 4.1 of the Reich Citizenship Law stated: “A Jew cannot be a citizen of the Reich. He has no right to vote in political affairs, he cannot occupy a public office.” The law thus excluded all Jews from the Volk, stripping them of civil rights and protections, and excluded them from the German moral obligation

The Nazis utilized similar moral justification centered around the promotion of the Volk to justify the euthanasia of inferior Germans, which was provided by doctors and lawyers.  Article 2.1 of the Nuremberg Laws stated, “A citizen of the Reich is only that subject who is of German or kindred blood and who, through his conduct, shows that he is both willing and able to faithfully serve the German people and Reich”. Here, it important to note that a citizen is only someone that is fully capable to serve the Reich. This excluded Germans with mental or physical handicaps from the Volk and any moral obligation. The Sterilization Law was passed in 1933, two years before the Nuremberg Laws, indicating that Germans with mental and physical disabilities were considered inferior before enacting the law. The Nuremberg laws serve to formally exclude those with handicaps from the state and exclude them from the state’s protection, allowing them to be euthanized.

Through the passing of the Nuremberg Laws and Sterilization Laws doctors and lawyers both endorsed and normalized the practice of eugenics, used to ‘scientifically’ improve the population through controlling procreation to increase the likelihood of passing on desirable genes. Doctors reasoned that the just and morally correct thing to do was to kill all Germans with handicaps, or undesirable genes. In the treatise “Permitting the Destruction of Live Unworthy of Living” the doctors Karl Binding and Alfred Hoche wrote, “how wasteful we are with the most valuable lives, those filled with and propelled by the strongest will to live and the greatest life force, and how much labor power, patience, and wealth we squander, often uselessly, merely to maintain lives unworthy of living until nature…robs them of the last possibility of continuing.” In this statement, the two doctors reasoned that it was more important to use the available resources and man power to aid the living and fit Germans rather than the unworthy. There was also an economic appeal to ridding the nation of “unworthy life.” Nazis viewed the ‘unworthy’ as incapable of economically contributing to the nation, and instead using a large sum of resources, therefore it was justifiable to kill them for the greater good. The picture to the left (Figure 2) shows the cost of allowing an individual with a disease to live compared to the costs of sustaining an Aryan family of five. This pitted those who were heathy against those who were not and created environment where Germans were susceptible to put the need of the Volk above all others. In the wartime economy resources were scarce, potentially making German citizens more susceptible to economic rationale of killing those unworthy of life. The justification to kill those who could not equally contribute to society, and instead used a greater amount of resources, was reinforced by doctors who affirmed the worthlessness of the individual and the law allowing for euthanasia.