The Roma & the Sinti 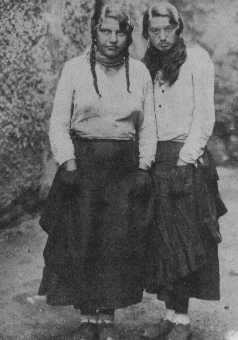 Gypsies in Czechoslovakia in 1937 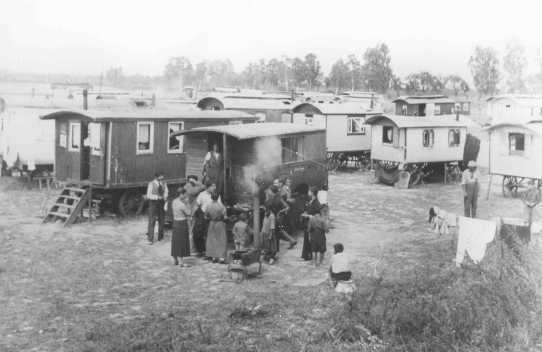 Marzahn, the first Gypsy internment camp for the Roma and Sinti; date is unknown

During the Third Reich, members of Hitler’s government sought an answer to the “Gypsy Question”: How to eliminate the Roma and the Sinti, ethnic minorities who lived without stationary homes, from German society, because they were deemed an inferior race by the Nazi regime.

The anti-Gypsy ideology embraced by the Nazis had its roots in a variety of influences, including Social Darwinism, Eugenics, and historical German attitudes towards the Roma and Sinti. The result, the solution to the Gypsy Question, was to segregate the Roma and Sinti in ghettos and banish them to concentration camps before expunging them from Germany.

The Nazi attitude toward Gypsies reflected ideas from Social Darwinism, the theory that “persons, groups, and races are subject to the same laws of natural selection as Charles Darwin had perceived in plants and animals in nature” (Editors of Encyclopedia Britannica, Social Darwinism). From the Nazi perspective, the Aryan race was superior to all others, including the Roma and Sinti. Therefore, Hitler’s regime established policies and undertook actions to eradicate them, effectively “unnaturally” selecting members of the Aryan race in order to guarantee the survival of those arbitrarily deemed “fittest.” In his circular from December 8, 1938, Heinrich Himmler, a leading member of the Nazi party, revealed the connections between Nazi ideology related to the Gypsies and Social Darwinism: “(The) knowledge derived from race-biological research have shown that the proper method of attacking the Gypsy problem seems to be to treat it as a matter of race” (Heinrich Himmler, Combating the Gypsy Nuisance). In order to justify the “othering” of the Gypsy population, Himmler extends the definition of race to include “all persons who by virtue of their looks and appearance, customs or habits, are to be regarded as Gypsies or part-Gypsies” (Ibid). Himmler’s circular then lays out a step-by-step plan to both “establish the racial affinity of every Gypsy living in Germany and of every vagrant living a Gypsy-like existence” and then register these persons with the Central Office for Combating the Gypsy Nuisance.

Once the Nazis had established an ideological foundation for their ostracization of the Roma and Sinti, they utilized their version of Eugenics, “the science of improving a human population by controlled breeding” (Oxford English Dictionary, Eugenics), to eliminate the possibility that the Gypsies might pollute the Aryan bloodline. In 1933, for example, the Nazi regime enacted “The Law for the Prevention of Offspring with Hereditary Diseases” that created a Eugenics Court to oversee and approve applications to force the sterilization of many Roma and Sinti. And on November 14, 1935, the Nuremberg Race Laws were extended to the Gypsies. These ordinances prohibited marriage between Germans and Roma or Sinti and made it illegal for them to produce offspring.

While the Nazis took the persecution of the Roma and Sinti to an extreme, anti-Gypsy attitudes in Germany prior to the rise of Third Reich lay the foundation for the Nazi solution to the Gypsy Question. Historically, Gypsies had a reputation for being untrustworthy, thieves, and lower class, and many were suspected of witchcraft. Gypsies were some of the more than 22,000 people executed for witchcraft after the establishment of The Bavarian Witchcraft Law in 1611.

The Nazi solution to the Gypsy Question was inhuman and barbaric. The Roma and Sinti were segregated into ghettos, and an estimated 500,000 Gypsies were sent to concentration and internment camps, including Marzahn:

In his memoir A Year in Treblinka, Yankel Wieknik describes the arrival of Gypsies to that concentration camp in 1943: “One day, while I was working near the gate, I noticed the Germans and Ukrainians making special preparations...meanwhile the gate opened, and about 1,000 Gypsies were brought in (this was the third transport of Gypsies). About 200 of them were men, and the rest women and children...all the Gypsies were taken to the gas chambers and then burned” (Yankel Wieknik, A Year in Triblinka, 3).

In conclusion, the Nazis answered “The Gypsy Question” by isolating the Gypsies into ghettos and sending them to concentration camps. The Nazi anti-Gypsy ideology had its roots in centuries-old German beliefs about Gypsies, but also stemmed from Social Darwinism and Eugenics.The Nazis distorted the theory of Social Darwinism to justify their belief in the superiority of the Aryan Race and used methods associated with Eugenics to prevent the pollution of the bloodline by the Roma and Sinti. These factors all resulted in the mistreatment, sterilization, internment, and murder of more than 500,000 Roma and Sinti during the Holocaust.

For Further Reading →
The Roma & the Sinti