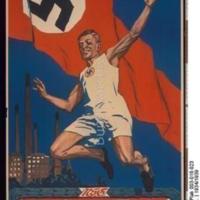 During the Third Reich, one way the Nazis gained support was by organizing leisure time for German citizens. Leisure time and activity was made accessible and affordable to middle-class Germans and boosted the German economy with the promotion of mass consumerism. Robert Ley headed the organization, Kraft durch Freude, which served as a major propaganda tool and promoted leisure time through mass tourism, physical activities, and social events. German holidays also played a large role in the “Strength through Joy” movement. For example, Nazi ideals were incorporated into Christmas traditions. KdF also promoted other leisure events, such as the Bayreuth Wagner Festival, where workers were encouraged to attend for a low cost. Nazis believed that designating leisure time for middle-class workers would allow for more productive labor during the working portion of the year. In addition to implementing leisure time, posters and propaganda helped support the movement. In particular, propaganda for the KdF Wagen served to display ‘Aryan’ Germans overjoyed to be driving in their new and affordable cars. Overall, the “Strength through Joy” movement was used to promote the advantages of National socialism to the masses of German people.