Women as Perpetrators in the Third Reich

When it comes to describing the German, female experience within the Nazi state, there is a particular tension of whether or not women were victims or perpetrators. This mainly has to do with the fact that the Nazis were anti-feminist and, generally, anti-women. Their ideology promoted a hyper-masculine ideal that incorporated many of the commonly held dogmas about gender roles and the familial structure during the nineteenth century. The Nazis’ conceptions of misogyny, patriarchy, and chauvinism aimed to marginalize women by reinstating the “traditional” archetype of femininity, which determined woman’s value by whether or not she was able to bear a child. Though there were policies to promote motherhood and marriage, there was also legislation for German women who were not considered “fit” or of “value”. In these cases, there were forced sterilizations and abortions. Some historians emphasize women’s loss of agency within the Reich due to the Nazis attempt to condemn women to the household by passing anti-women laws. This, accompanied with the underlying stereotype that women were not capable of partaking in, let alone committing, many of the atrocities that the German men had performed, helped develop that historical narrative. Although women fell victim to their government’s ideologies, one cannot deny that female participation and female leadership within the Nazi party. Many women played their part in cultivating Nazi policy and the protection of the Volk (Aryan people) by either conforming and benefiting from Nazism due to ambition and opportunism, or by becoming active members and leaders of the party, and, even as perpetrators of the Holocaust as guards at the concentration camps. 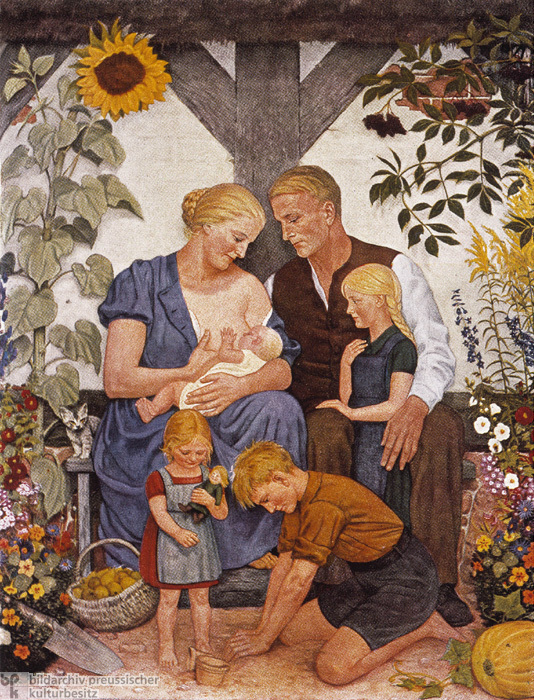 Agency Within the Private Sphere

Life within the Nazi state included the disintegration of the divide between the public and private spheres of society within Germany. According to Nazi ideology, everything was directed towards protecting and sacrificing for the Volksgemeinschaft, or the “people’s community” of inclusion and value. For women, value was determined by a woman’s ability to bear children and nurture the future mothers and soldiers of Germany’s “Aryan” blood. In his speech to the Nationalist Socialist Women's Organization, Hitler described the “private sphere,” or the separate world from the public sphere of politics and men in which women should reside. A woman’s place in society was, therefore, as a “devoted friend” to man and the lifeline for the “preservation of her people in family units.” The Nazis rejected proposals to conscript married women for labor. They aimed to keep mothers out of the work force and instead exploited all other possibilities for labor, including slave labor, before turning to female labor.

Although Hitler clearly promoted the “German woman” as a sacrificial, nurturing, and obedient person and attempted to keep women out of the “public” sphere of German society, women were able to find a place within the Nazi state and cultivated their agency to reap the benefits of the oppressive measures against the non-“Aryan”, non-valuable citizens of Germany. In this way, they “imbibed an ideal of womanhood ubiquitous in the Western tradition and hoped to use it for their short term advantage” (Koonz,12) by conforming to the Nazi ideal. 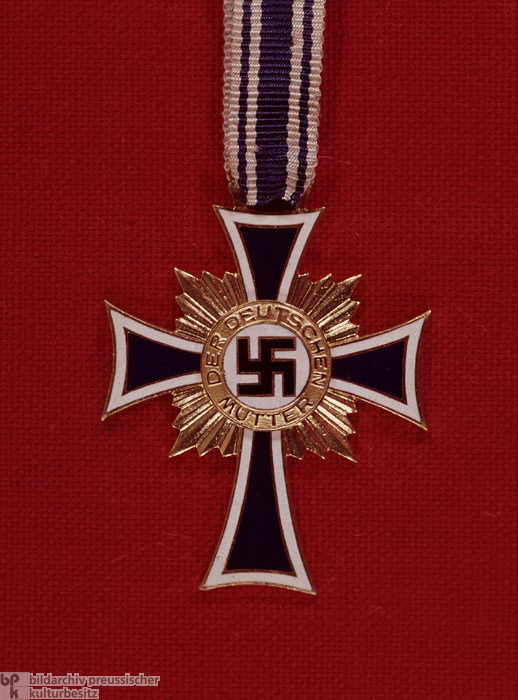 "The Cross of Honor for the German Mother": Three-Tiered Medal for Mothers with Four or More Children (1938)

Motherhood, for example, earned women respect and benefits for daily life. If a "'genetically fit', politically reliable, and socially worthy" (GHDI) woman performed her feminine duty and provided the Reich with multiple healthy, “Aryan” children, she could be awarded the “Cross of Honor for the German Mother” (pictured left). The award included “a number of financial privileges” (GHDI) in recognition for her service to the Nazi state.

Nazi Women →
Women as Perpetrators in the Third Reich