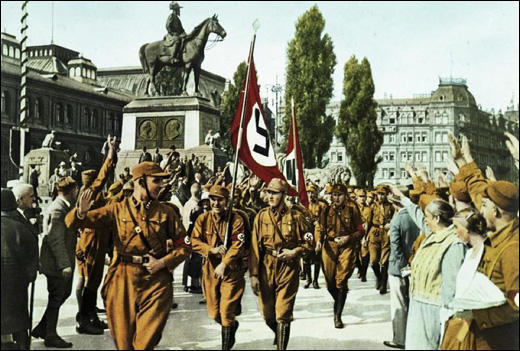 The Sturmabteilung, or Storm Detachment, was the paramilitary wing of the Nazi Party, infamous for their combativeness and distinctive brown uniforms. As the ideological soldiers of the Nazi Party, the SA was responsible for protecting Nazi gatherings and dignitaries, fighting with other political paramilitaries, and leading public marches in support of Hitler. During the years leading up to the Nazi seizure of power, the SA was indispensable, becoming the public face of Nazism in the streets of Germany. However as the Nazis gained real political power, the radicalness of the SA that served Hitler so well in Weimar Germany became a liability, and the ambition and personality of SA leader Ernst Röhm gave the SA a bad reputation among the German establishment. This culminated in the Night of the Long Knives, when Hitler had Ernst Röhm and other SA leaders executed, permanently diminishing the power and prestige of the Sturmabteilung in Nazi Germany.