“Who can resist temptation? Only he for whom neither reason nor his principles, nor his conscience, nor his freedom, nor his virtue is the final measure of all things, but who is prepared to sacrifice all these when, in faith and bound solely to God, he is called to responsible action, and who in his life seeks nothing more than to respond to God's question and his call. Where are these responsible people?”

Characterized by mass murder, brutality, discrimination, and a totalitarian regime, Nazi Germany appeared to be a Godless society. In reality, religion and particularly Christianity pervaded the lives of the German people. Nazi politics promoted appeasement and at the very least acceptance in terms of responses from the German people.  The Catholic Church, unlike the Protestant Churches, relied upon structured political agreements between the Vatican in Rome (Holy See) and the Nazi party. Despite Catholics’ divided position in terms of Nazi support, the 1933 Concordat temporarily “secured” the role of the Catholic Church in Germany. Protestantism, the overwhelming faith majority, soon became a point of contention with the introduction of two ideologically contrasting denominations: the German Christians and the Confessing Church. Although racial animosity cannot be limited to the German Christians, the Confessing Church’s resistance to the German Christians’ alliance with the Nazis and insistence on preserving a separation of church and state demonstrated an awareness of the Third Reich’s manipulation of existing religious organizations for political gain. 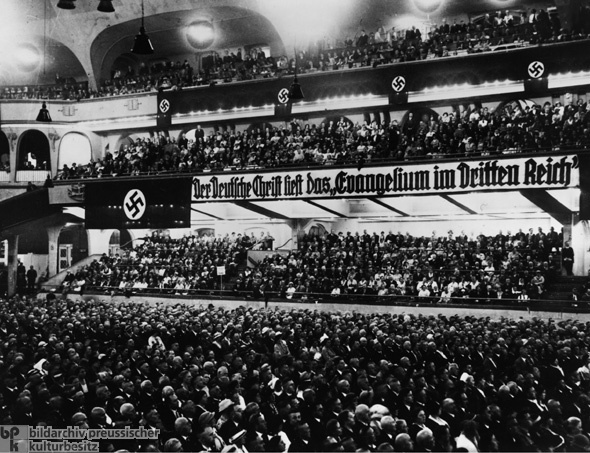 Nov. 13, 1933 Reich Conference of German Christians (Deutsche Christen) at the Sportpalast in Berlin (German History in Documents and Images).