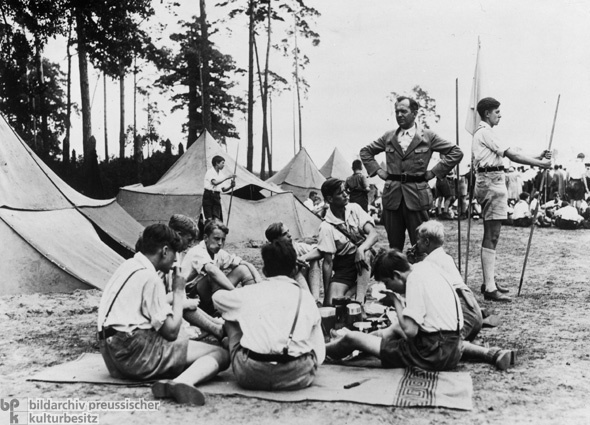 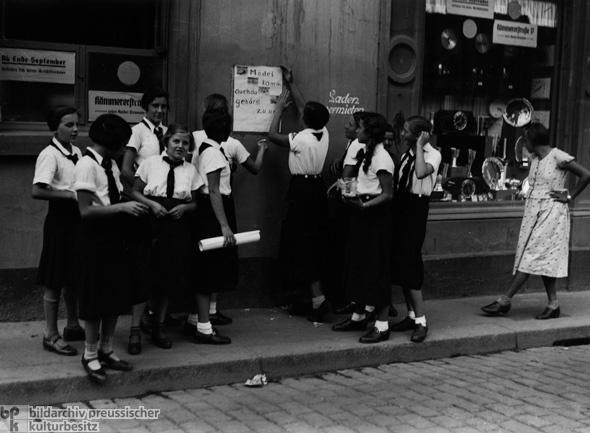 The Nazi movement was a movement that relied heavily on the support of the youth. The youth was a crucial component to the regime due to Hitler’s plan for war in order to gain Lebensraum, or “living space”.  The creation of youth organizations in particular, was important for the development of a generation loyal to Hitler. The Hitlerjugend or “Hitler Youth” was an all boy youth group created by the Nazi party for the purpose of conforming German adolescents to the ideology of the regime. Alongside the Hitler Youth was the creation of an all-girl youth group, the League of German Girls, which taught young women on their specific role as women in the regime.  The development of the Hitler Youth coincided with Hitler’s concept of the Volksgemeinschaft or “people’s community” that was geared to create a whole society that adhered to Nazi ideology. The Nazis targeted German youth as essential for the future of the German Volksgemeinschaft and the Nazi state. The Hitler Youth proved to be of great importance in the inculcation of National Socialist ideals in children in order to develop a generation geared towards preparation for war. The goal of the Hitler Youth was to develop a generation that easily and willingly conformed to Nazi ideals. However, through certain mandated practices of the regime, resistance emerged and further established segments of a new generation that willingly displayed signs of resistance against the Nazi regime. 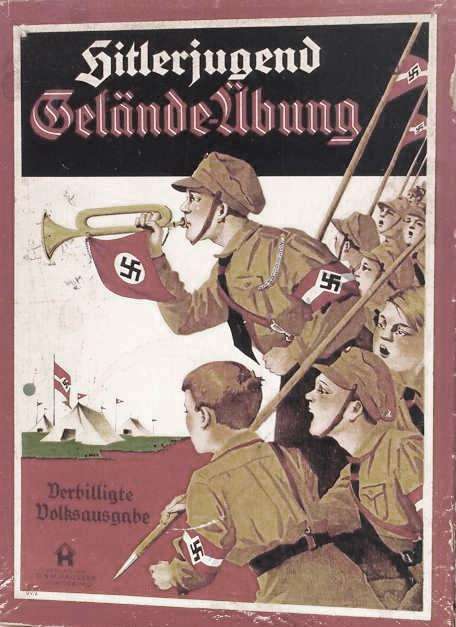 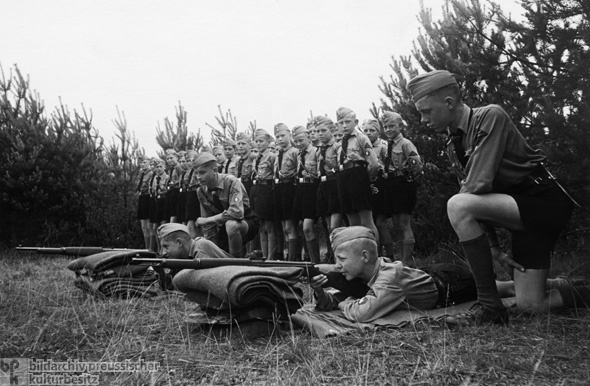 The Nazi Party officially formed the Hitler Youth on the fourth of July in 1926. The organization comprised of more than half of German youth. Leaders of the Hitler Youth instilled the Nazi ideology and virtues of the regime through activities conducted in the program. Numerous ideas and traits were taught in the organization and included “theories of Lebensraum, the love of heroism, and the love of toughness, silence, loyalty, and sacrifice. Emphasis was put on racist and anti-Semitic theories [and were] taught to defy danger and to glory in the idea of dying heroically in battle” (Lepage 84). The organization was designed to develop a generation that was loyal to Hitler and would easily conform to the ideology of the regime. Members of the youth group took an oath that specified loyalty to Hitler. Children as young as ten years old stated, “In the presence of this blood banner, which represents our Führer, I swear to devote all my energies and strength to the savior of our country, Adolf Hitler” (Lepage 85). Children involved in the Hitler Youth and League of German Girls were taught to worship Hitler as a savior of Germany depicted in pledge and oath. Members of the Hitler Youth that fell between the ages of fourteen and eighteen attended camps specified for militaristic and physical training. The boys engaged in activities that consisted of “physical exercises, parading, war-gaming, close-order drills and maneuvers…running, swimming… camp fires, cookouts, and adventurous field trips. To these were added navigation training with map and compass, the use of camouflage and arm drills.” (Lepage 100). Leaders of the organization strategically added leisure activities, such as the cookouts, to aid in the development of brotherhood between members in the camp. In addition to physical fitness activities was the implementation of militaristic training. Along with the use of camouflage, mapping, and drills was the training for specialized aspects of combat. For instance, activities in the camp consisted of training with “the use of hand grenades…pistols, carbines, rifles, and machine guns in order to acquire sharp eyes and steady hands” (Lepage 100). Through constant exposure in militaristic training, members of the Hitler Youth gained excessive combat and artillery experience that aided in the preparation for war. The importance to recruit and increase membership into the Hitler Youth was crucial for the growth of a generation that was loyal to Hitler and were further willing to sacrifice themselves to create a “superior” Europe. 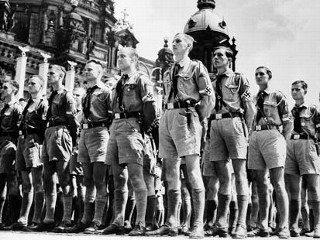 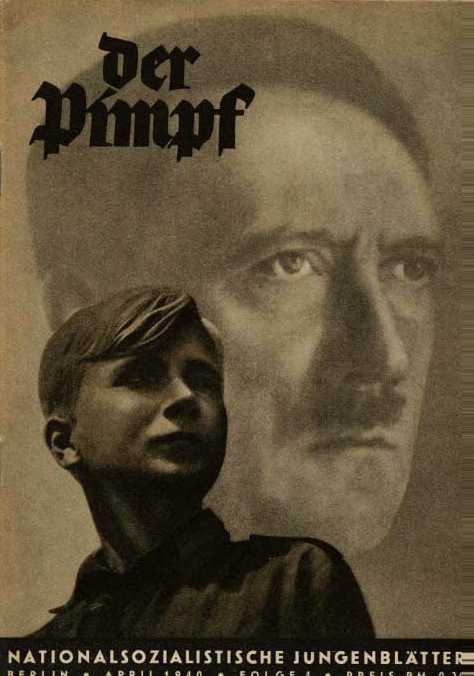 Hitler’s creation of the Hitler Youth and League of German Girls was for the purpose to persuade the youth to become fully loyal to the Führer and his ideology. Hitler sought to influence the youth to join the program through numerous means. The Nazi party strategically utilized propaganda, such as films and posters, and incentives such as knives and badges, to increase membership into the Hitler Youth. Membership alone between 1933 and 1934 increased by 1,282,524 (Lepage 32). The Nazi party created the Hitler Youth alongside other competing youth groups in order to give children the voluntary choice of membership. However, as of December 1, 1936, all competing youth groups were banned and membership into the Hitler Youth was mandatory. The implementation of the Law of the Hitler Youth mandated that, “all of the German youth in the Reich is organized within the Hitler Youth. The German Youth besides being reared within the family and school, shall be educated physically, intellectually, and morally in the spirit of National Socialism to serve the people and community, through the Hitler Youth”. The creation of the law was important to the regime as the Hitler Youth was an effective tool for spreading Nazi ideology. The law mandated that every aspect of life amongst the German youth, were to be focused on the regime, regardless if it was at home, school, or in the Hitler Youth. Children ages ten to eighteen were required to join either the Hitler Youth or League of German goals as the youth group was claimed to be “a form of honorary service to the German nation” (Lepage 32). Thus, as every man and woman had their required duty to the regime, so did German children by law. Despite admiration for the Nazi regime, the compulsory aspect of the law created a structure that required the conformity of the youth. The structured aspect of the law, along with other factors, led to increasing resistance by young people. Emergence of opposing youth groups formed and further portrayed segments of a generation willing to resist the regime.

Mein Führer!: An illustration displayed in a German elementary school textbook with the following text for the purpose to depict the admiration of Hitler amongst the youth:

Members of the Edelweiss Pirates

The Law of the Hitler Youth added to the conformist structure of the regime and further required the youth to fully obey the regime. In response to these structures was the emergence of opposing youth groups that displayed active resistance and non-conformity against the regime. Most identified of these opposing youth groups were the Edelweiss Pirates and the Swing Youth. Despite the vast contrast in opposition demonstrated by each group, each organization actively resisted the regime. The Swing Youth consisted of urban middle class adolescents who joined together and played degenerate music. However, the reports written by the Hitler Youth seemed to not be as concerned about the music the Swing Kids would play but rather the “sexual promiscuity, lack of parental discipline, and the general cult of ‘sleaziness’” they portrayed (Welch 232). The Swing Kids allowed Jewish youth to attend their activities, but still “cultivated a somewhat elitist culture that rejected strident nationalism of the Hitler Youth but was nonetheless politically indifferent to National Socialism" (Welch 232). In contrast to the Swing Youth, the Edelweiss Pirates were outspoken about their dislike for the political aspects of the regime and sought to publicize their resistance. The Edelweiss Pirates were well aware of the Volksgemeinschaft-inspired propaganda towards the youth and the militaristic aspects of the Hitler Youth. The Edelweiss Pirates resisted the Hitler Youth for reasons beyond the regime’s ideology. Specifically, the Edelweiss Pirates were aware of the class differences within the Hitler Youth and the favoritism displayed for children of the elite (Kater 139). The Edelweiss Pirates’ concern over the favoritism of children of the elite within the Hitler Youth was in part due to the fact that they mostly derived from homes of working class parents. In spite of the group’s willingness to resist the regime, their “non-conformist behavior tended to be restricted to petty provocation” (Welch 232). The group often created songs and wrote graffiti that publicly denounced the regime. Although these were acts of resistance, the actions did not truly heavily impact the regime itself, but still became a concern for authoritative members of the Reich. 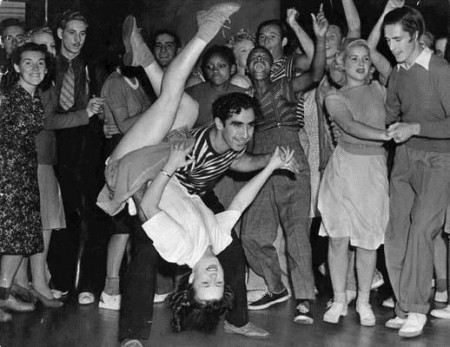 Members of the Swing Youth

In response to the emergence of oppositional youth groups after the Law of the Hitler Youth, the Nazi regime tightened the Law through a “Second Executive Order”. The Second Execution Order to the Law on the Hitler Youth (Youth Service Regulation) of 25 March 1939, further enhanced regulation of certain aspects depicted in the Law of the Hitler Youth, as well as the criteria for membership. According to the revised law, failure to comply with the law would result in criminal prosecution. In addition, the Youth Service Regulation developed criteria for membership in the youth group and stated “Juveniles, who have been found, in the opinion of a medical officer of the HJ or of a physician, commissioned by the HJ, to be unfit or only partially fit for service in the Hitler Youth, must be relieved altogether or partially from service in the Hitler Youth according to the medical decision”. In addition, there was a lack of interest to join the National Socialist Workers Party amongst the youth that further correlated to the decline of membership in the Hitler Youth. According to the SD Reports on the Attitude of Young People towards the Nazi Party, “'most boys and girls have not the slightest interest in becoming a member of the NSDAP. All attempts by the relevant authorities to get them involved have been in vain”. Regardless of the heavy regulations implemented by the regime in order continue conformity amongst the youth, interest to join the Hitler Youth diminished quickly.

The Hitler Youth was created in order to develop a generation geared towards the preparation of war under Nazi ideals, however, the regulations under which it occurred aided in the creation of small groups willing to resist the regime. Seen through the resistance of the Swing Youth as well as the Edelweiss Pirates, the youth began to question the regime in one aspect or another. The growth of suspicion towards the regime and further directive by the Reich caused the lack of interest in joining the Hitler Youth by 1943. Although there were members of the Hitler Youth, the decline of interest in the party and the organization further foreshadow the loss of moral and overall belief in the regime.