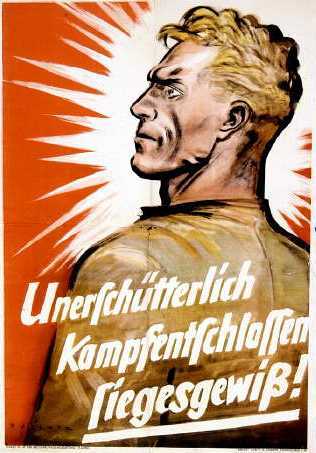 This Images depicts the Nazi Masculine Ideal: A strong,

He is confident and ready to go to war.

Creating a hyper-masculine national image was crucial to the identity of the highly militaristic Nazi state because masculinity was typically associated with strength and might. The pursuit of Lebensraum, or living space for the German people, a founding vision of the Nazi movement, required a powerful military to conquer the territories necessary to carry out such a goal; thus, militarism was central to the Nazi state. It was important to exude the image of masculine military to demonstrate German dominance to the world. It was even more crucial to maintain this military masculine identity within Nazi society, to bolster the national sense of pride and to entice young men to join the armed forces. The goal was to remake the German man into the ideal soldier. In addition to militarism, ideals regarding ‘Aryan’ supremacy, racial purity and hygiene, racial and social deviants and the importance placed on sexuality, all played important roles in shaping the Nazis’ understanding of manhood and masculinity. Their hyper-masculine militant image was the foundation upon which the Nazis defined and cultivated manhood and was the impetus and inspiration for atrocities against Jews, homosexuals and other “undesirable” groups. It fed the notion of Aryan superiority and undergirded the desire to go to war and conquer Europe.