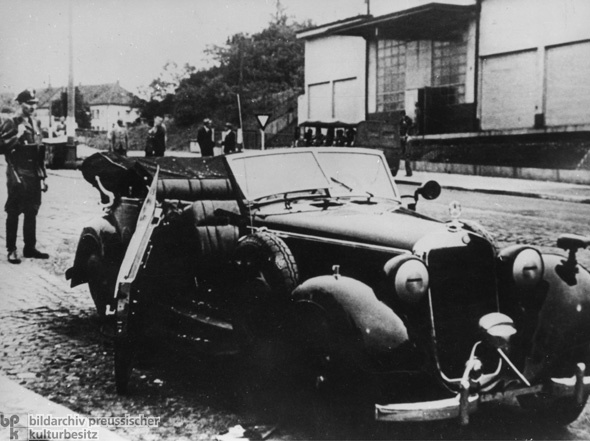 The result of Heydrich's Mercedes after the assassination attempt. Days later Heydrich would die from infections caused by the attack.

On the morning of May 27th, after multiple missed opportunities and setbacks, the assassination attempt was put forward. The two assassins were Jan Kubis and Josef Gabcik, both of whom had served in the Czech Army for years. After Gabcik’s failed attempt to open fire on Heydrich and his car, Kubis was able to throw a grenade under the car, directly behind Heydrich’s seat. Following the explosion Heydrich recovered from the initial attack and opened fire, giving both assassins the idea that they had failed on their attempt. Eventually, Kubis and Gabcik escaped while Heydrich was rushed to the hospital. In the following ten days, Heydrich would be in the hospital under tight protection and the top medical services available, but came down with an infection. Then on June 4th, 1942 Heydrich would die. Sepsis was declared the reason of death, but it was brought about by the wounds received from the explosion.