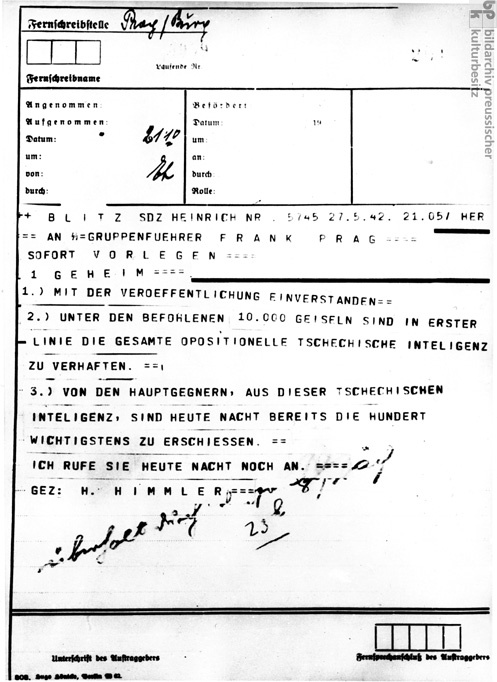 The order given down by Himmler responding to the assassination attempt on Reinhard Heydrich and the actions to be taken.

Passed May 27, 1942 the same day as the assassination attempt. 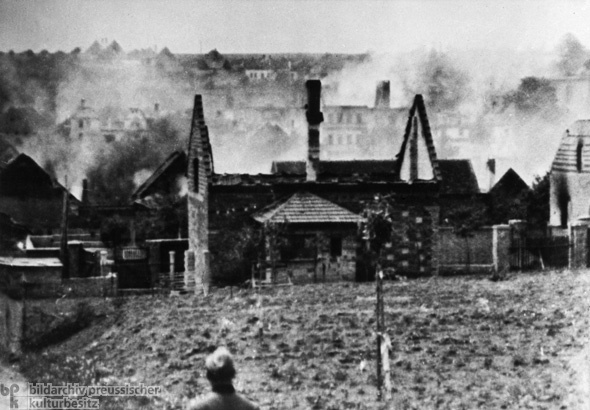 The Lidice Massacre was in response to the death of Heydrich. The murders and burning of the city took place on the night of June 10, 1942.

What followed the death and funeral of Heydrich, was something that the Czech resistance expected, but not on the scale that it was executed. In Himmler’s Order for the Arrest and Execution of Members of the Oppositional Czech Intelligentsia, he instructs Heydrich’s second in command, Karl Frank, to arrest 10,000 Czech intelligentsia members, and then kill 100 of them immediately. Once that was completed, they were to continue killing those arrested until Kubis and Gabcik were captured or killed. While this was happening Kubis and Gabcik were hiding in a church, still in the city. Eventually their position was given up by one of those arrested and tortured, but they were not going to willing give in to the Nazis. After hours of fighting both Kubis and Gabcik would kill themselves in the church along with others that had been hiding there from the Nazis.

What followed this event would leave a mark on the Czech people that could not be erased. On June 10, 1942, German police and SS units went to the town of Lidice. Believing that those in the town were guilty of harboring resistance workers, the SS began rounding up every man and boy over the age of fifteen. Once they were all gathered up, they were all killed. The women and children were then separated and sent to concentration camps. Following the Lidice Massacre, no resistance every came back. The death of Heydrich had no positive impact for the Czech resistance, and never slowed the Nazi regime. The only thing that came out of the assassination was the murder of Czech citizen and the complete stoppage of the Czech resistance.