Anti-Semitism during the Nazi rise to Power 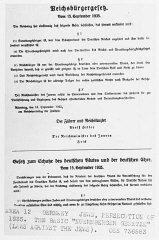 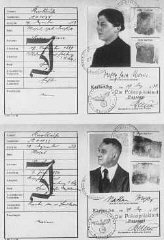 Adolf Hitler’s rise to power with the NSDAP built upon the existing public distain towards European Jews which dated backed to the Nineteenth century from anti-Semitic influencers such as Heinrich von Treitschke. At the time of the NSDAP assuming power of Germany, the number of Jews in Germany numbered roughly half a million. The NSDAP vowed to deal with the Jewish problem in Germany which was further emphasized from blame during the Great Depression in 1929 over claims of being the proximate cause of the crash of the financial sector which lead to the rising unemployment of German citizens. Hitler used the systematic dehumanization of the Jewish people through the creation of the Volk to establish a unity among the ethnic superiority of the German race. This use of racial and ethnic pride was to justify and carry out the attack on Jewish society through the division of both social and physical spheres within German life. The concept of the German-blooded people as being racially superior was a motif used in most of the publicly displayed agenda of the party.

The NSDAP urge to find a solution to the Jewish question began on September 15, 1935 under the Nuremberg Laws. The law defined of who was considered Jewish and what constituteds being a full-blooded German citizen. Under the Nuremberg Laws, anyone who had three or four Jewish grandparents was of the Jewish race regardless of their religious beliefs. Further, the Law for the Protection of German Blood and Honor stated explicitly separated Jewish people racially and socially through prohibiting sexual relations and marriage between Jews and non-Jews. The Nuremberg laws paired with the use  of a strong nationalist German-blooded identity by the NSDAP portrayed the Jewish people as a danger to society. Both through the alienation of Jews in society from being disallowed German citizenship and the racial laws that depicted Jewish blood as inferior which further advanced the Aryan German superiority complex, allowed for the NSDAP to set the groundwork to being the extermination of European Jewry with little resistance. These Jewish people were purposefully shown as being not worthy of German citizenship to push upon the German people the idea that Jewishness was holding back the expansion of the German nation.