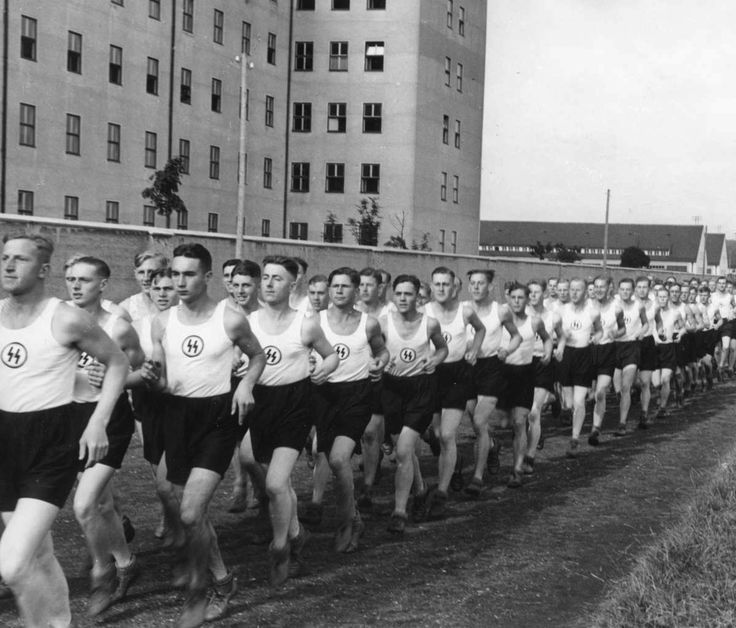 Waffen SS Volunteers from the Netherlands training in 1940.

The men admitted into the SS were to be no older than the age of 23 and to stand at least 1.74 meters tall. They were to be of nordic or germanic blood and needed to be clean of “mutation” or “malformation”. These were the requirements to even be considered to join the SS and if one would fulfill these requirements, then they would take multiple physical and mental tests before being admitted as a recruit of the Waffen SS.

In the early stages of the Waffen SS’ creation (between 1933-1936), Himmler’s resources were rather scant and his Waffen SS would be trained in the basics of military tactics and strategy by the Wehrmacht. However, this only affected their officers’ tactical prowess, for the Waffen SS line infantry themselves were trained as assault infantry, like the British Commandos and United States Army Rangers. Eventually Himmler’s troops’ quality resulted in Hitler allowing the Waffen SS Assault Troops to practice large scale military training operations with live ammunition and artillery barrages in 1938, giving the Waffen SS valuable experience with their weapons and equipment in the field. This was unique for the Waffen SS, for Hitler normally made the Wehrmacht perform a far more cautious and “safe” training operations.

Himmler would compensate for the lack of proper tactical and strategic training with ensuring his men were at their physical peak and also completely ideologically indoctrinated. Himmler would make physical training one of the most important parts of the Waffen SS’ training and ensured the various sports such as boxing, running track and field, rowing, and others were integrated throughout the day, creating not only fit and healthy troops but also building the camaraderie within the Waffen SS.

As a training manual of the Waffen SS cited by Bernd Wegner states, “Sport arouses belligerence, hardens the will, promotes self-discipline, and therefore promotes the training of the SS man to the level of a combat-effective fighter. Sport forces on to accept subordination, and strengthens the cohesion and esprit de corps of the troops. In addition, it should also afford the SS man relaxation and rest; and give him pleasure.” This shows that Himmler understood the importance of balance when training his men and ensured that they not only enjoyed the training but would also find it as a release from the indoctrination they would undertake, similar to that of students going to the gym or playing sports to relieve stress. Steiner, a leading officer within the Waffen SS and commander of the Deutschland Division expressed his views on the sport oriented training of the Waffen SS as follows regarding the troops under his command, “[they are] a disciplined sport type, of supple physical stature and mentally concentrated on performance”. He took pride in his men’s physical ability to carry out extremely mobile shock assault actions while maintaining full combat effectiveness.