Himmler and the Occult SS 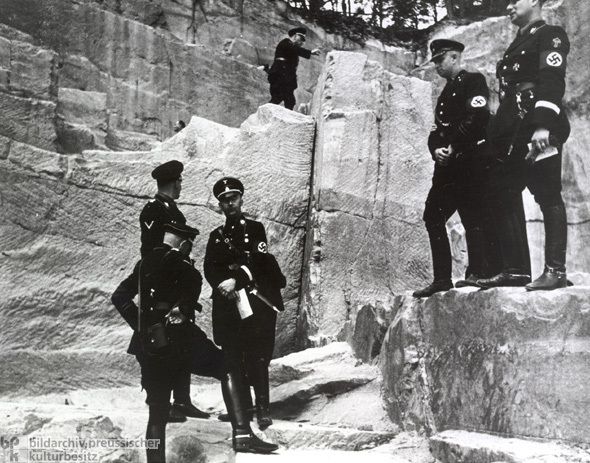 Himmler (center) and SS Colonel Wiligut under the alias Weisthor (at right, above Himmler) and others at a quarry in Palatinate, observing ancient German runes—Wiligut’s supposed expertise.  1935.  German History in Documents and Images.

Heinrich Himmler, leader of the Schutzstaffel, or the SS, had a relationship to the occult that would prove far more persuasive.  Himmler brought the occult into the SS through many different channels and was primarily aided in this by Karl Maria Wiligut (later Weisthor), an occultist he placed as the head of the “Department of Pre-and Early History” who later be placed at the head of his personal staff.  Wiligut consulted Himmler on many aspects of the SS that would become key identifiers, such as heavily participating in the design of the Totenkopfring (see above), the ring worn by all SS members, which featured a death head and runes (Treitel 215).

← Occultists Within the Nazi Party
Wewelsburg Castle: Occultism in Architecture →
Himmler and the Occult SS